CHICAGO – This week the Council on Tall Buildings and Urban Habitat (CTBUH) released the names of the Urban Habitat Award winner and finalists, the next in a series of announcements for the CTBUH Awards. The 2015 winner of the CTBUH Urban Habitat Award is the PARKROYAL on Pickering in Singapore, remarkable for its extensive greenery throughout, and its porous, pedestrian-oriented integration with the ground plane.

Acknowledging that the impact of a tall building is far wider than just the building itself, the Council launched the Urban Habitat Award in 2014, as part of the overall CTBUH Awards program, to recognize tall buildings’ improvements to the urban realm as a whole. This year’s Urban Habitat winners and finalists were chosen for their exemplary designs that are intelligently influenced by both their environmental and cultural context, and which add to the social sustainability of both their immediate and wider settings. 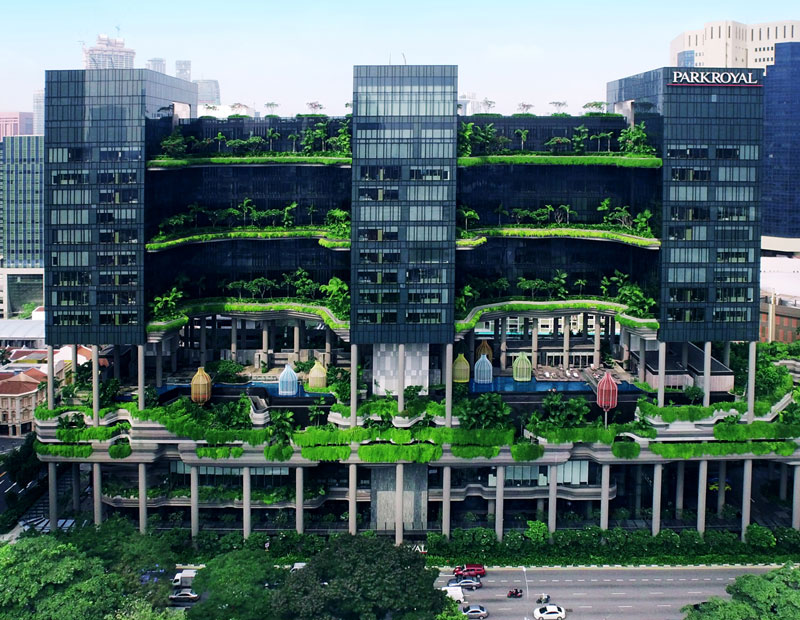 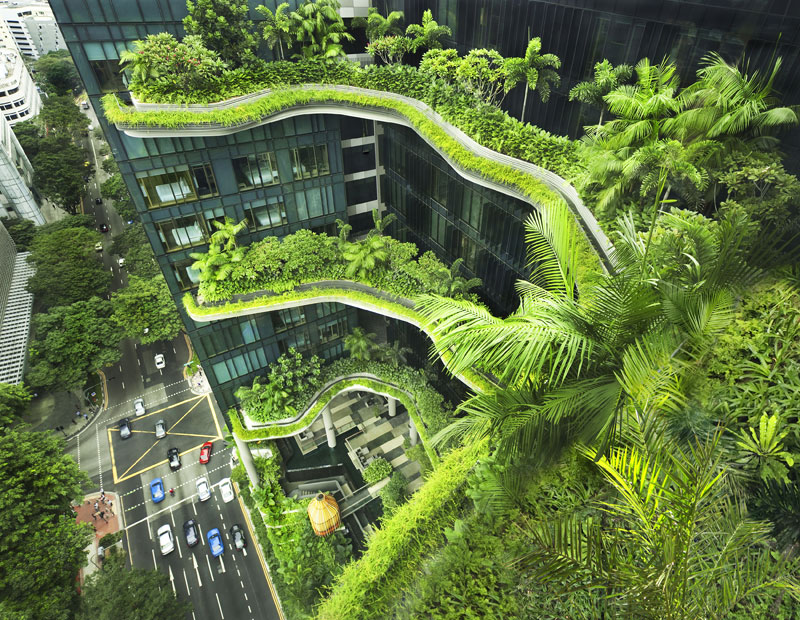 The jury also recognized the following projects as finalists for their notable contributions to their urban environments:

The winners and finalists will be celebrated at the CTBUH 14th Annual Awards Symposium, to take place at the Illinois Institute of Technology, Chicago, on November 12, 2015. The Symposium itself will feature an exciting series of presentations from the owners and architects of each building. Winners and finalists will also be featured in the annual CTBUH Best Tall Buildings Book, published in conjunction with Images Publishing and distributed internationally each year. 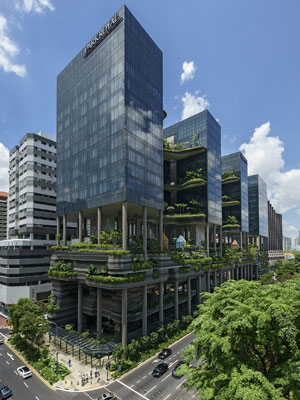 PARKROYAL on Pickering is located in the midst of Singapore’s high-density city center, and achieves its “hotel-in-a-garden” concept through extensive amounts of landscaping carefully integrated into the building’s design. The project incorporates extensive greenery and landscaping throughout.

A contoured podium responds to the street scale, drawing inspiration from terraced landscapes, such as rice paddies. These contours create dramatic outdoor plazas and gardens, which flow seamlessly into the interiors. The building appears to hover above the ground, resting on a series of columns that resemble the trunks of trees. This structural solution opens up the footprint underneath the building, making way for an expansive vegetated buffer between the street and a covered walkway that encircles the perimeter. This “urban verandah” establishes a cool, protected thoroughfare along the entirety of the block.

Multiple, extensive sky gardens are inserted along the façade, bringing lush greenery directly to the guestrooms and public areas. There are 15,000 square meters of plantings, water features, waterfalls, terraces and green walls in the many sky gardens. In terms of scale, the landscaping amounts to 215 percent of the site area, showing that, even as our cities become taller and denser, we do not have to lose our green spaces. See the building profile on The Skyscraper Center.

“PARKROYAL demonstrates  that public space can occur in a skillful way across multiple levels. The degree to which the building was covered in spectacular greenery was noteworthy. This was not a case of token greenery, but instead a full expression of gardens in the sky.”
– James Parakh, O.A.A, City Planning Department, Toronto, Canada 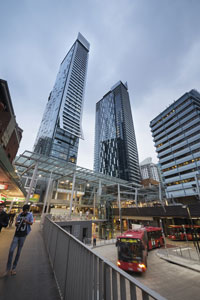 The Chatswood Transport Interchange (CTI) is a mixed-use Transit Oriented Development project underpinned by an urban design strategy that establishes new streets and reinstates connections that were once severed by the previous station and railway line. The project demonstrates how transportation infrastructure project schemes can be integrated into the structure of the city to enhance the activity and quality of urban spaces. Representing the largest project of its kind in the state of New South Wales, CTI includes: an upgraded rail station linking the North Shore and Chatswood to Epping lines; an open, landscaped bus interchange; 10,000 square meters of retail spaces at podium level; and public pedestrian linkages reconnecting the center of Chatswood. Above this sit the Metro Residences complex, which accommodates 550 apartments. See the Metro Residences profile on The Skyscraper Center. 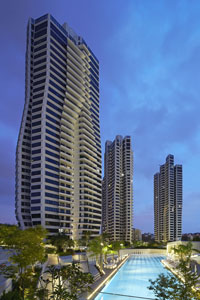 d’Leedon’s concentration of residential units in towers with small footprints creates abundant public space for residents and visitors to enjoy at ground level. The surrounding landscape is one of the strongest features of the project, and offers benefits to all residents. Various elements included to enhance residents’ quality of life are water features, lush vegetation, plazas, athletic facilities, and green fields. The project’s site has been arranged to align with the existing streets beside it. The primary axis of Farrer Road and the surrounding residential buildings have all informed a series of lines within the d’Leedon site to integrate the development with its neighborhood. These lines flow through the site and are organized in bands which define the location of each tower for optimal orientation. See the building profile on The Skyscraper Center. 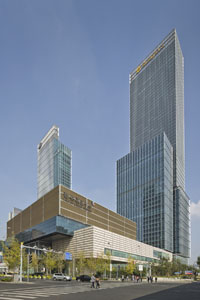 Jing An Kerry Centre occupies a prominent location in the Jing An district that, along with Shanghai overall, has developed swiftly over the past several years. The project’s design intends to create an accessible space, incorporating flexibility in its functions, which can serve to accommodate the area’s growing population, and meet the needs of residents and users. The building thus serves multiple functions, housing retail, transit, and offices all in one complex designed to accommodate the city’s growing population, but built to human scale. In contrast with the monolithic buildings nearby, this scheme is divided into distinct blocks that correspond to their different functions, with a large plaza to tie it together. See the building profile on The Skyscraper Center. 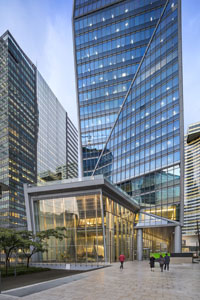 Located in the heart of La Défense, just outside of Paris, Tour Carpe Diem is the first building in the area to reconnect the raised esplanade – known as the dalle – that continues the axis of the Champs-Elysées to the historic urban fabric of the surrounding city of Courbevoie. Tour Carpe Diem addresses the need for La Défense to evolve toward greater integration with its surroundings, through a more intimate pedestrian scale as well as more compelling architecture. This is primarily achieved through the addition of a monumental exterior staircase that links the dalle to an adjacent neighborhood within Courbevoie. The building is an important step forward in the evolution of La Défense toward pedestrian-friendly urbanism and environmentally responsible architecture. See the building profile on The Skyscraper Center.